Locals and art aficionados alike know about East Fork and the stunning pottery work the business turns out. What started as a passion project driven by the creative minds of Alex and John has transformed into a community mainstay that blends art and creativity with equity, diversity, and inclusion.

Producing exquisite pottery pieces with the power of strengthening the community has also brought them into the role of setting the standard and leading other businesses. But, this wasn’t something that happened overnight – nearly ten years into the journey, they have quite a bit to share. Not least of which includes the importance and the struggles to understand true leadership and how to conduct it successfully.

Back in 2010, current East Fork founder and board chair, Alex Matisse, had just finished his apprenticeships when John Vigeland, a friend, approached him about venturing into working together. Pottery is more often seen as an individual, solitary process, one that is worked on alone rather than with another.

But as they talked and planned, their creative concept developed into something concrete, something with great potential. And shortly after their meeting, East Fork Pottery was started. During the course of those 11 years in business together, they learned, pivoted, and adjusted their business to transform it into what they dreamed it could be. They started out on a mere 500 square foot facility, to now being in a nearly 75,000 square foot facility. They transitioned from being a team of two, to a team of over 100 employees. Next year, they’re expected to produce over one million pieces of pottery next year.

But, all this pottery is made by people, not machinery. And it is in the manpower that builds those pieces that East Fork separates itself as a leader of modern entrepreneurship.

When it comes to the people that work at East Fork, Alex, the founder, also notes that this is where East Fork’s biggest triumph lies: “I think [our biggest triumph is] just walking around the factory, and seeing all these people working and making decent money and having this place to come every day and show up… It’s there and offering that stability to folks. To see people come into the business from situations that I could never dream of – formerly incarcerated or formerly homeless – and see what happens when people are given a real shot within an organization.”

The team at East Fork believes firmly in holding to its values and principles. Those values include a firm emphasis on equity, inclusion, and social justice. By working with to hire and employ team members and focusing those hiring practices on equity and inclusivity, they’ve established themselves as a leader amongst other local businesses. During the periods of protesting following the murder of George Floyd, Alex recalled, “Through that moment we emerged as a leader, specifically for businesses and white-owned businesses as they tried to navigate the climate we all found ourselves in.”

A Cohort of Creatives

Learning to become leaders didn’t just happen overnight. Planning for successful growth has been a process long in the works, and a process that also involved the resources offered with Mountain BizWorks. In discussing the most valuable resource from Mountain BizWorks, Alex recalled the benefits of the ScaleUp program, which they took part in back in 2016.

The team at East Fork joined the third-ever cohort of the ScaleUp program. “It was a great springboard for us, as we were just starting to think about our growth plan,” Alex recalled. Through the program, they were able to truly focus on the potential of where East Fork could go, what it had the potential to grow into and become.

By focusing on growth strategies and how to further develop the business on a grander scale, the program proved pivotal toward not only the company’s growth but also its ability to achieve that growth without sacrificing or compromising on any of its values. “We came out of [ScaleUp] with a good business model…there’s a direct correlation that you can pull from all these experiences.”

In addition to ScaleUp, the leaders at East Fork also participated in the pilot program for Mountain BizWorks’ Craft Your Commerce, the first cohort of its kind back in the spring of 2018. With a focus on creatives and craft-based businesses, the Craft Your Commerce program works to connect and grow art-related entrepreneurial businesses with other craft-based businesses. The program also offers workshops and classes to help similar businesses learn how to take their business to the next level. If you’re a similar creative business, Mountain BizWorks is opening spring workshop series for the Craft Your Commerce program, so take advantage while you can!

With eyes on the future, East Fork has already developed its 2025 goals and beyond, which include continued growth, continued passions, and continued emphasis on equity and equality. 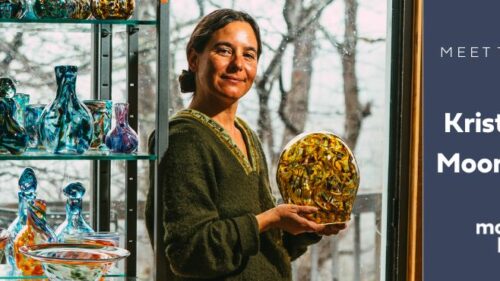 Starting Small Kristen Muñoz, owner of Moon Girl Glass, can trace her fascination with the material back to…

Mountain BizWorks is now accepting applications for its first Latino Catalyst Cohort, which will be facilitated entirely in…